Three Manifestos for the Future of the Artistic Doctorate – Tuomas Laitinen, Rachel Krische and Anne Juren

Home/Case Studies, Resources/Three Manifestos for the Future of the Artistic Doctorate – Tuomas Laitinen, Rachel Krische and Anne Juren
Previous Next

Three Manifestos for the Future of the Artistic Doctorate – Tuomas Laitinen, Rachel Krische and Anne Juren

ADiE invited three artistic-researchers –  Tuomas Laitinen, Rachel Krische and Anne Juren – to offer a vision or manifesto for an unknown future as part of the ‘Future Manifestos’ event, Helsinki, August 2019.

The manifestos were shared through the means of artistic practice and can be thought of as a generative space in which we might be able to re-imagine artist-research and reflect (perhaps) on how the doctorate might make a difference – to art, to movement, to research, to communities, to our world.

ADiE asked each artist to consider:

In what way’s might the artistic doctoral researcher engage with the world differently?

How might the doctoral process be refigured, transformed, repositioned?

What does art have to do with it?

Each of the manifestos reflects the artist researchers own experiences and are formed / informed through their own research practices. They each in their own way speculate upon future opportunities for artistic research to offer an expanded vision of the artistic doctorate in dance and performance. They are in turn playful, sensuous and participatory. They act as provocations – inviting a space for the audience to discuss and re-imagine the role of the artist-researcher and to re-consider the position art has in artistic research.

In the tradition of art manifestos, writers have aimed to revolutionize contemporary art and society through awakening their audience – helping them to realize something that the writers already have realized. In this arrogant attempt, they tend to end up with universalizing statements about the future of art.

An audience, by contrast, is receptive and always specific to site, time and composition. Likewise is this manifesto, which is composed of sixty people reading sixty unique, event-specific letters at the Zodiak Stage on the 31st of August 2019. Together the letters contain the curriculum of the future doctoral studies in artistic research. 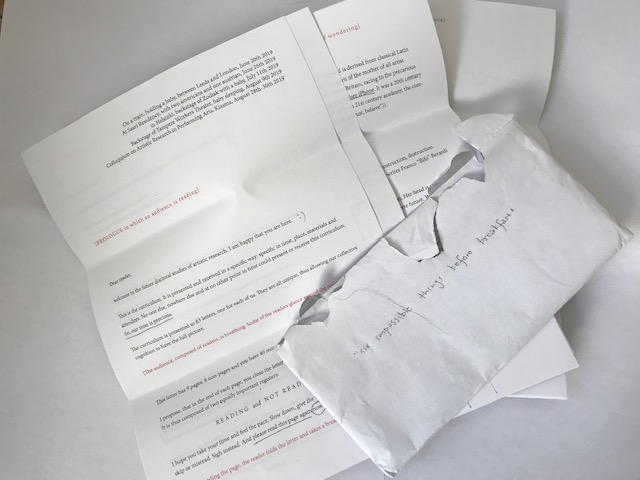 The audience are each given an individual letter as they enter the space.

In the space the audience find that chairs are arranged throughout, an invitation to sit (or not).

They open their letter and begin to read.

Each letter guides each audience member through a process in a shared space of reading with others.

The audience does not manifest.

They attend, submit, listen and are (not) seated. They do not write a manifesto, only read it.

The manifesto itself was an event of reading and the letter, which when  with the video footage, document the event.

A Note on documentation: This event was formed through 21 letters that can be downloaded, read and, should you wish, enacted by a group. Each letter was printed in three copies, augmented with notes written with a pencil and distributed to the participants in envelopes. The manifesto itself was an event of reading and the files, combined with the video footage, document the event.

Tuomas Laitinen (FI) is a director, performance artist and writer. His artistic practice has revolved around inventing new forms of performance based on the bodily experience of the audience and on questioning the nature of spectatorship. His works have taken for example the forms of retreats, family gatherings, rituals of encounter, 7-day mystery plays, pole dances in living rooms or practices of immortality. Since 2005 his artistic home base has been Reality Research Center, a Helsinki-based experimental performative arts collective. He worked in the editorial board of Esitys-magazine in 2007-17, has written reviews and articles in Finnish non-academic publications and is the co-editor of Esitysradio-podcast and Ice Hole Live Art Journal. Throughout his career he has been active in creating organizational foundations for the unorganized field of live art in Finland. In 2017 he started as a doctoral candidate at the Theater Academy of Uniarts Helsinki.

Rach Does dancing – A solo performative lecture, disguised as a dance performance

Created specifically for the academic conference Future Manifestos: Exploring the Future Potentials of Artistic Doctorates in Dance and Performance, Rach Does Dancing, is a performative lecture, disguised as a dance performance. Or maybe it’s the opposite.

“I will be dancing a lot, using loads of twitchy movement, and I’ll probably say something. If I have time, I might sing a song…” Rachel Krische, 2019

Following on from her own slog through the doctoral process, she attempts (but of course might fail) to reveal that an artistic doctorate in dance can be a vehicle to support a universal equality between words and movement – equalising the value of movement for the word inclined and words for the movement inclined.

It is a rallying cry for a de-commodification of a sort, in a kind of ‘playful two fingers up to’ concrete stuff and a ‘hurrah’ for new forms of alternative intersubjective communication norms for the future human race. It’s incontrovertible proof that dancing is an intellectual (as well as joyful, spectacular and accessible) articulation of knowledge, both explicit and tacit, in and of itself – Yeah!

With a career spanning 26 years as an Independent Dance Artist, Rachel Krische (UK) has performed, made work and taught extensively and internationally including in: Europe, Scandinavia, Russia, Azerbaijan, India, Bangladesh, China, Taiwan, Hong Kong, Australia, New Zealand, USA and the UK. She has collaborated and performed with over 30 artists such as Deborah Hay, La Ribot, Wendy Houstoun, Akram Khan, Colin Poole, Matthias Sperling, Siobhan Davies and cellist Anton Lukoszevieze, as well as presenting her own solo improvisation work. She also won the Jerwood Choreography Award with Ben Wright in 2002. Rachel is published in Choreographic Practices and has a forthcoming book chapter in Body, Space, Object: Dialogues between Art and Dance. She is currently HEA Senior Fellow and Senior Lecturer in BA Dance and MA Choreography at Leeds Beckett University after writing and establishing the initial undergraduate dance programme there in 2010.  She recently completed a PhD by Public Works based on her dance and choreographic practice.

The Body, Desire for a Manifesto underneath the Skin

A Manifesto for the Future is an action that refers to a dislocation and also to a belonging. A place that is not the one you live and a time that is not the one of right now, defined as they are by dissatisfactions, refusals and faults. A Manifesto is, therefore, a projection of a territory and a moment in which desires and rights are in some way satisfied and observed. Any manifesto, therefore, is always formulated by a subject that occupies a certain position in the world.

I would like to propose the body as a place for the Manifesto. I would like to explore how phantasms of the future could trouble established notions of anatomy. How can new imaginations, new thoughts, new perceptions of the subject body can be inscribed into the sensation itself? Is an action possible inside this entanglement of perceptive events? How far can we go with the body’s transformation, with its disfiguration, together with the person in whose body the Manifesto is taking place?

Anne Juren (FRA/SVE) born in Grenoble/France, is a choreographer, dancer and performer based in Vienna. In 2003, she cofounded the association Wiener Tanz- und Kunstbewegung in Vienna. Her choreographic works and artistic researches have been extensively presented in international theatres, festivals, and different art spaces and venues. Since 2015, she develops choreographic works under the name Studies on Fantasmical Anatomy, as an ongoing research that expands the term choreography in engaging the body in di!erent states of corporeal, poetic, fantastical, speculative, imaginative dimensions and experiences. Since 2013, Anne Juren is \u2028a practitioner. She was part of the artistic committee for the Master in Choreography at DOCH (2014-2018) and is currently\u2028 a PhD candidate at UNIARTS Stockholm University of the Arts. In 2019, she will be a mentor of the danceWEB Scholarship Programme at ImPulsTanz